The Importance of Pre-Concert Talks 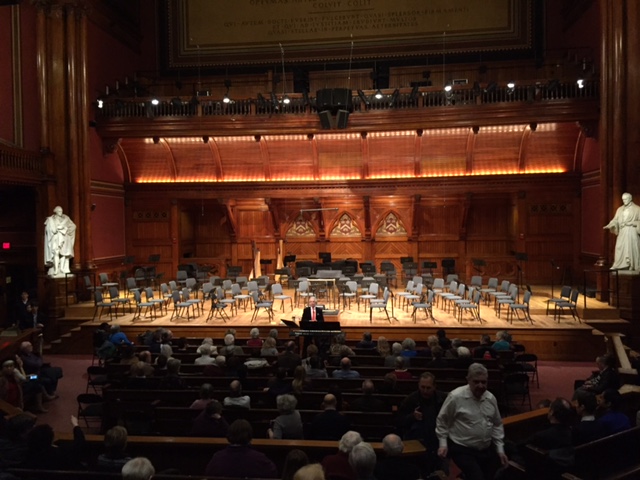 On Sunday, Encore hosted its second Etude event, gathering a group of music educators from across New England for a lovely afternoon of brunch and a Boston Philharmonic concert. The concert program consisted of Schumann’s Manfred Overture, Mendelssohn’s Violin Concerto and Elgar’s Symphony No. 1.

A highlight of the day was spending an educational hour together attending the pre-concert talk with Maestro Benjamin Zander. With his Roland keyboard, he demonstrated various melodic lines in the pieces and pointed out harmonic progressions that otherwise may have been missed by the audience. He reviewed each of the composers in depth and discussed the stages of their lives during which their pieces were composed.

When the performance began, it was easy to point out that time when the flute and oboe came out with the theme in Mendelssohn’s first movement – because we were told to listen to it. You could hear the sweeping romantic lines presented in Schumann’s piece – because it was demonstrated to us only minutes before. And we appreciated being one of the lucky few having heard Elgar’s Symphony No. 1 live because so much of the theme peppered throughout the ensemble could be missed in a recording – as we were told.

Attending the pre-concert talk gave me a new perspective of the pieces but also allowed me to connect with them on a deeper level. And thus, I have decided that no concert should be complete without a pre-concert talk! Here’s why:

The Boston Philharmonic has made it a habit to include a pre-concert talk for every performance, and often to a full house too! Doing this has set them apart from so many other professional ensembles and as such, they have received great support from the community.

It would be interesting to see how pre-concert talks affect the performances at the youth level in high schools or the community. If you already incorporate pre-concert talks, we’d love to hear more about them. We invite you to share your experiences with us at development@encoretours.com or by using our Contact Us page!

Here’s a small video from our pre-concert talk with Maestro Zander: