Taking Your Ensemble to Eastern Europe 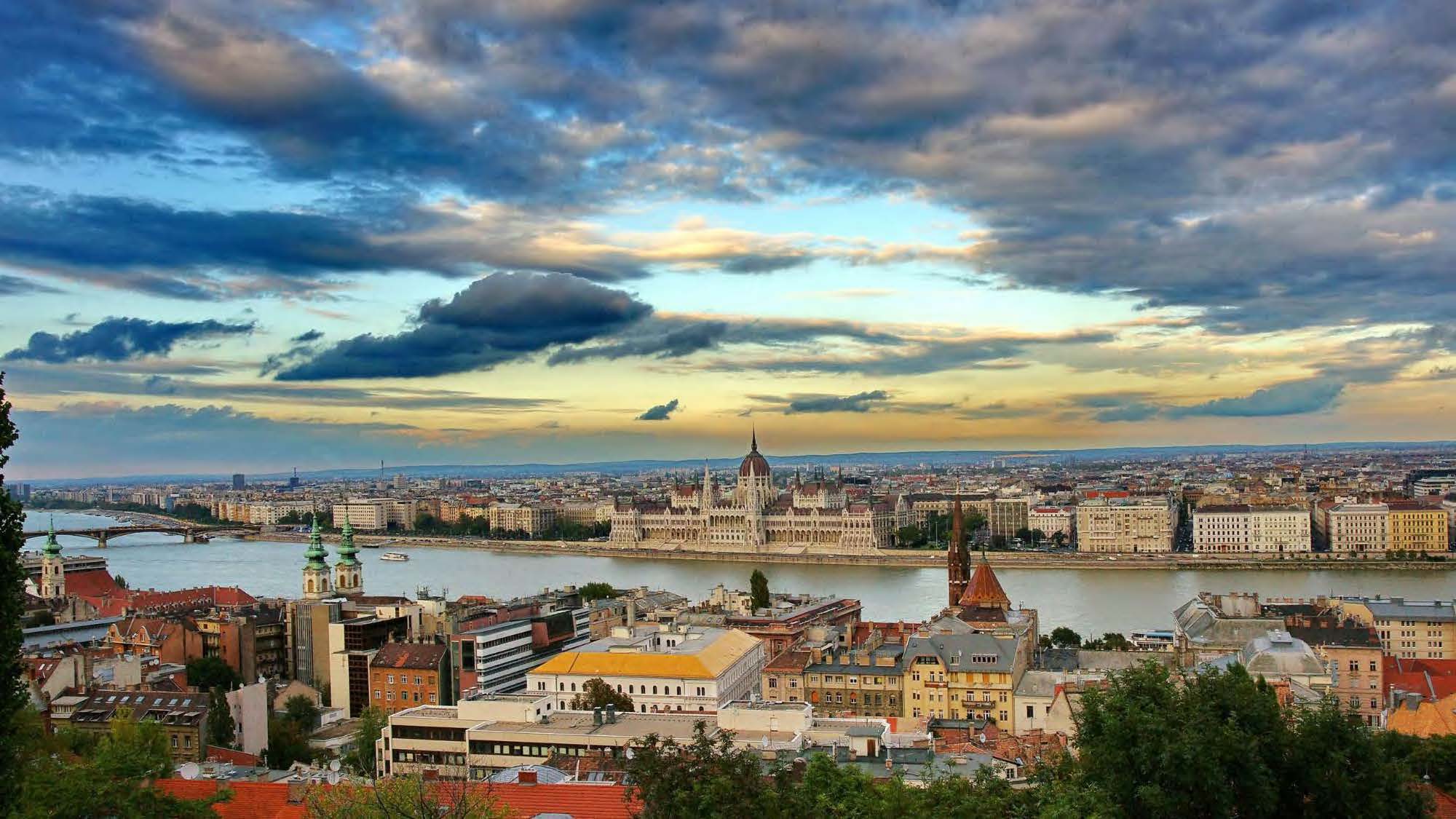 Budapest, the capital of Hungary

Looking for a performance tour that’s slightly off the beaten path and won’t break the bank? Pack your bags for Hungary, Slovakia, and the Czech Republic. While small in size, each country is full of old-world charm, a unique musical heritage, and wonderful concert venues.

Begin your tour in the Hungarian capital of Budapest, one of the most beautiful cities in Europe, along the majestic Danube River. 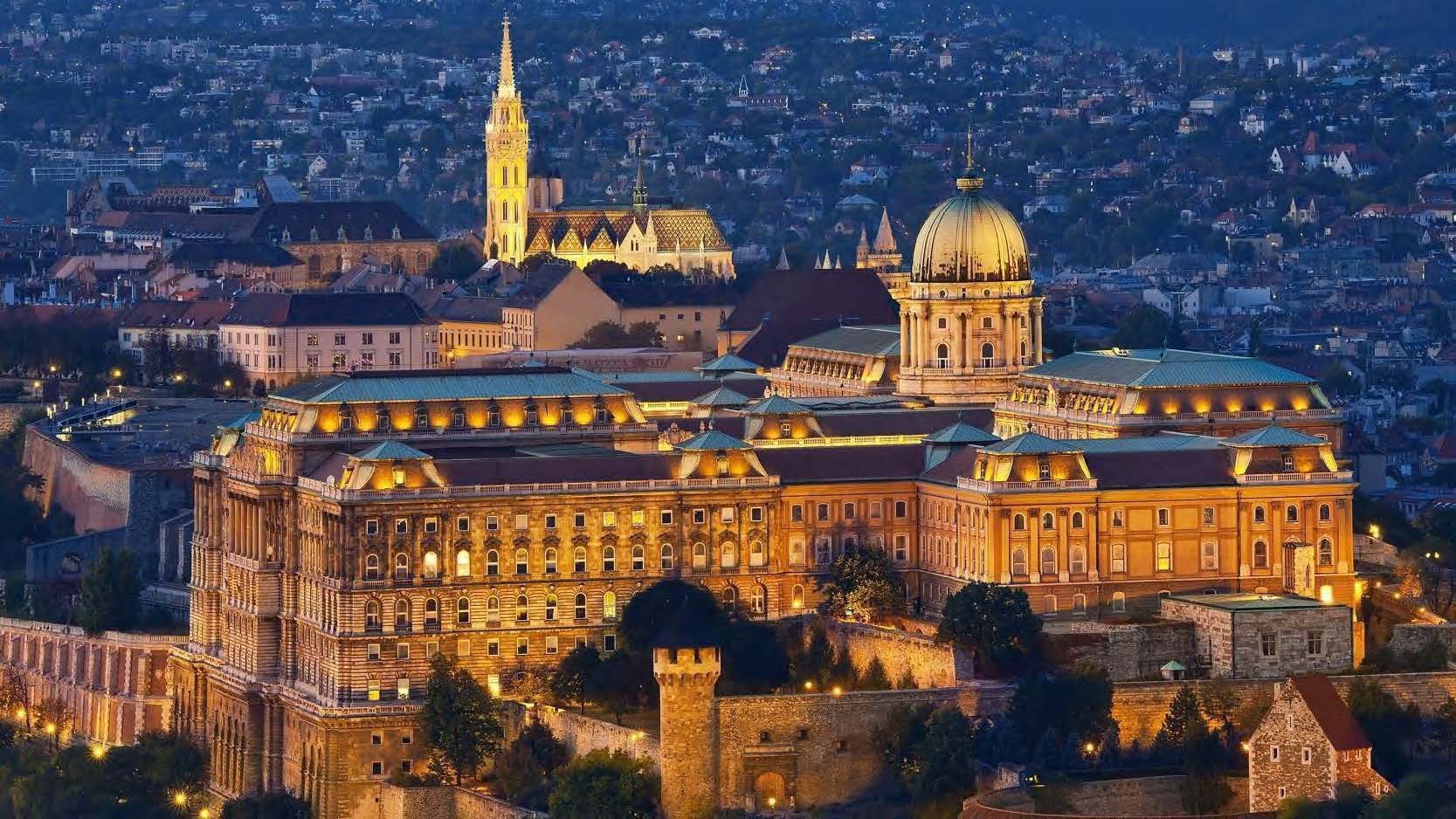 Visitors can visit the Museum of Music History at the magnificent Buda Castle.

Nicknamed the “Paris of the East” for its stunning architecture and charm, Budapest also boasts an abundance of arts and culture. On the grounds of the magnificent Buda Castle, ensembles can visit the Museum of Music History and learn about famous Hungarian composers Béla Bartók and Zoltán Kodály. The Franz Lizst Academy of Music here is the most prestigious music university in the country and includes a concert hall as well as a collection of valuable books and manuscripts donated by Lizst upon his death.

Nicknamed the 'Paris of the East' for its stunning architecture and charm, Budapest also boasts an abundance of arts and culture.

In the center of the city sits the beautiful Hungarian State Opera House whose horseshoe-shaped auditorium boasts the third best acoustics in Europe. 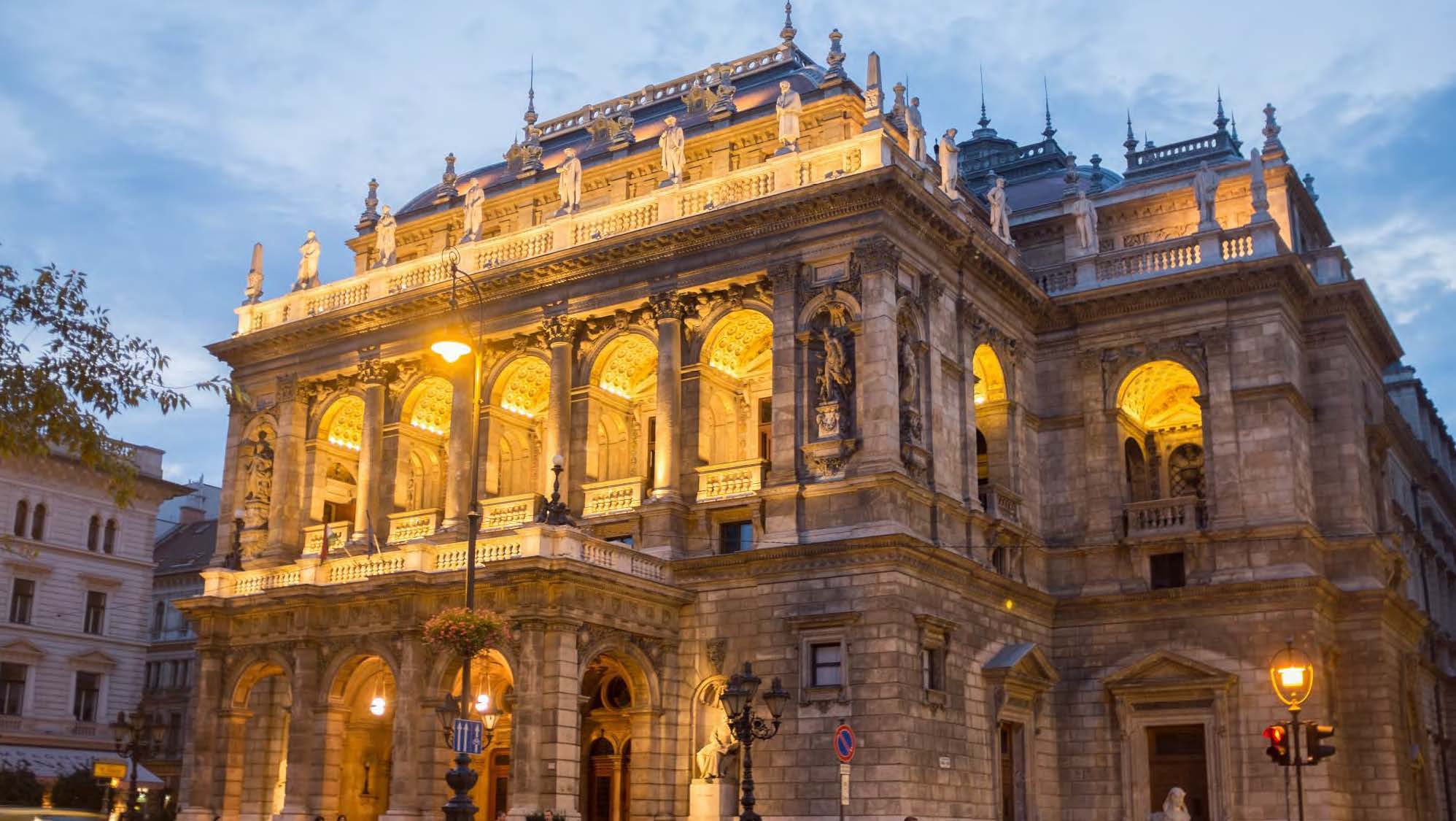 Groups can try 'taking the waters' at one of the eighty hot springs in the city—a quintessential Budapest experience since Roman times.

When not performing, groups can try “taking the waters” at one of the eighty hot springs in the city—a quintessential Budapest experience since Roman times. For those who would rather be on the water than in it, a dinner cruise down the Danube is a relaxing option. 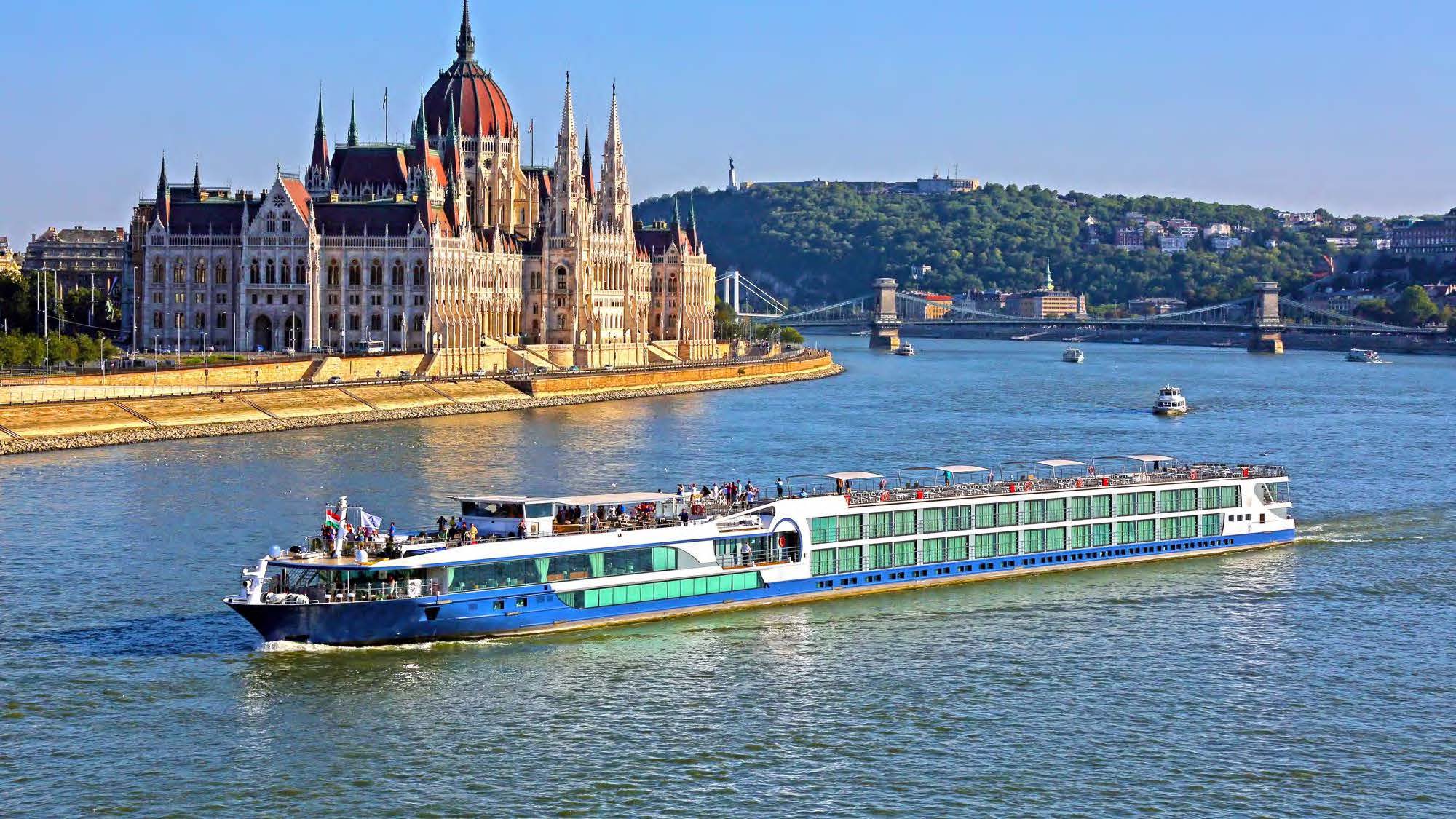 Other not-to-miss highlights are the Hungarian Parliament Building, Fisherman’s Bastion, Heroes’ Square, and the Great Synagogue. Complete your visit with a folklore dinner featuring live gypsy music and dancing. 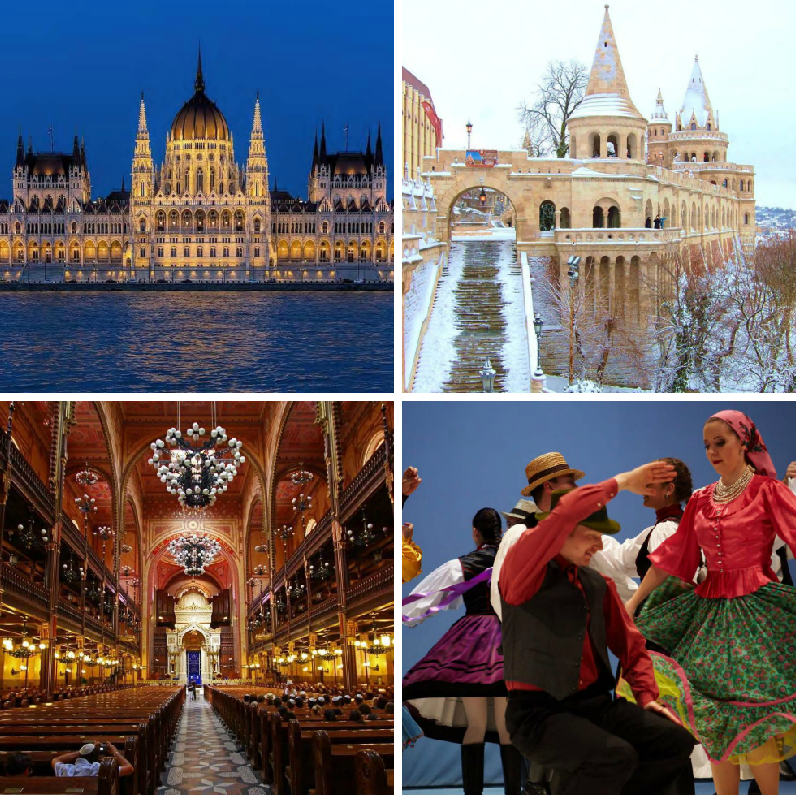 From the capital of Hungary, it's a two-and-a-half hour drive along the Danube to Bratislava. En route, take an optional side trip into Austria to visit Eisenstadt, the city of Joseph Haydn. As an additional option, groups can add a day and night in nearby Vienna. 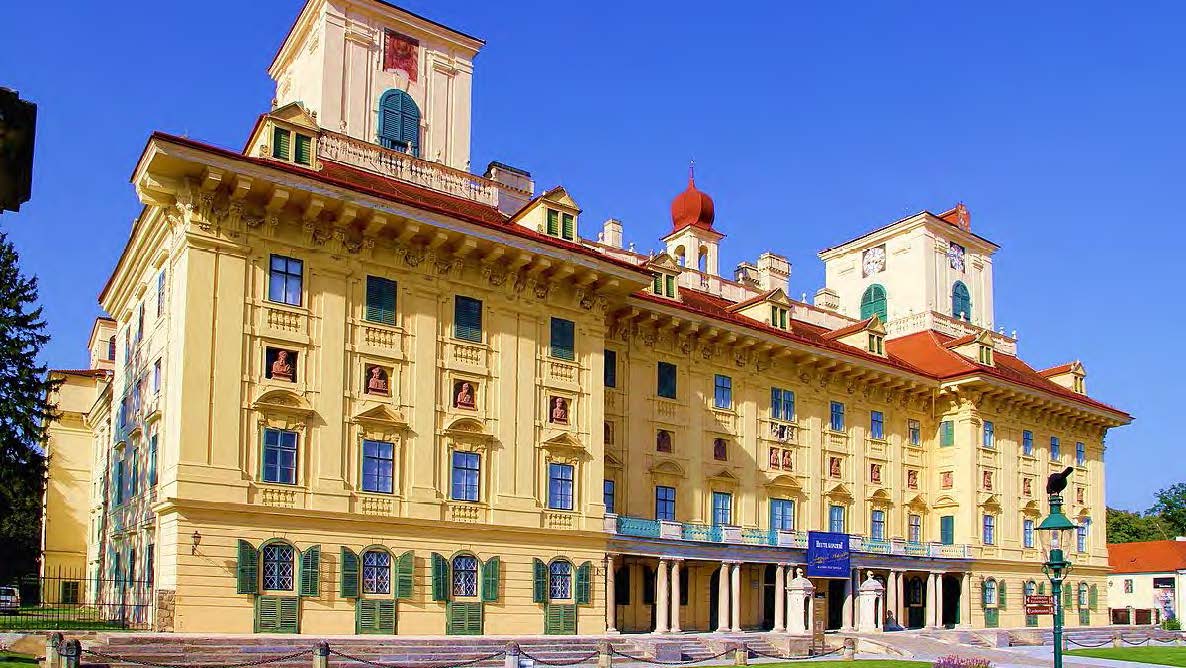 Bratislava, the capital of newly independent Slovakia as of 1993, is an intriguing mix of old and new. In the middle of the city, you’ll find what most tourists refer to as the “UFO Bridge”, a retro-futuristic structure topped by a flying saucer housing a restaurant!

Bratislava, the capital of newly independent Slovakia as of 1993, is an intriguing mix of old and new.

Nearby is the Old Town, where wandering the cobblestone streets and exploring the 14th century Gothic Old Town Hall transports visitors back in time a few centuries. 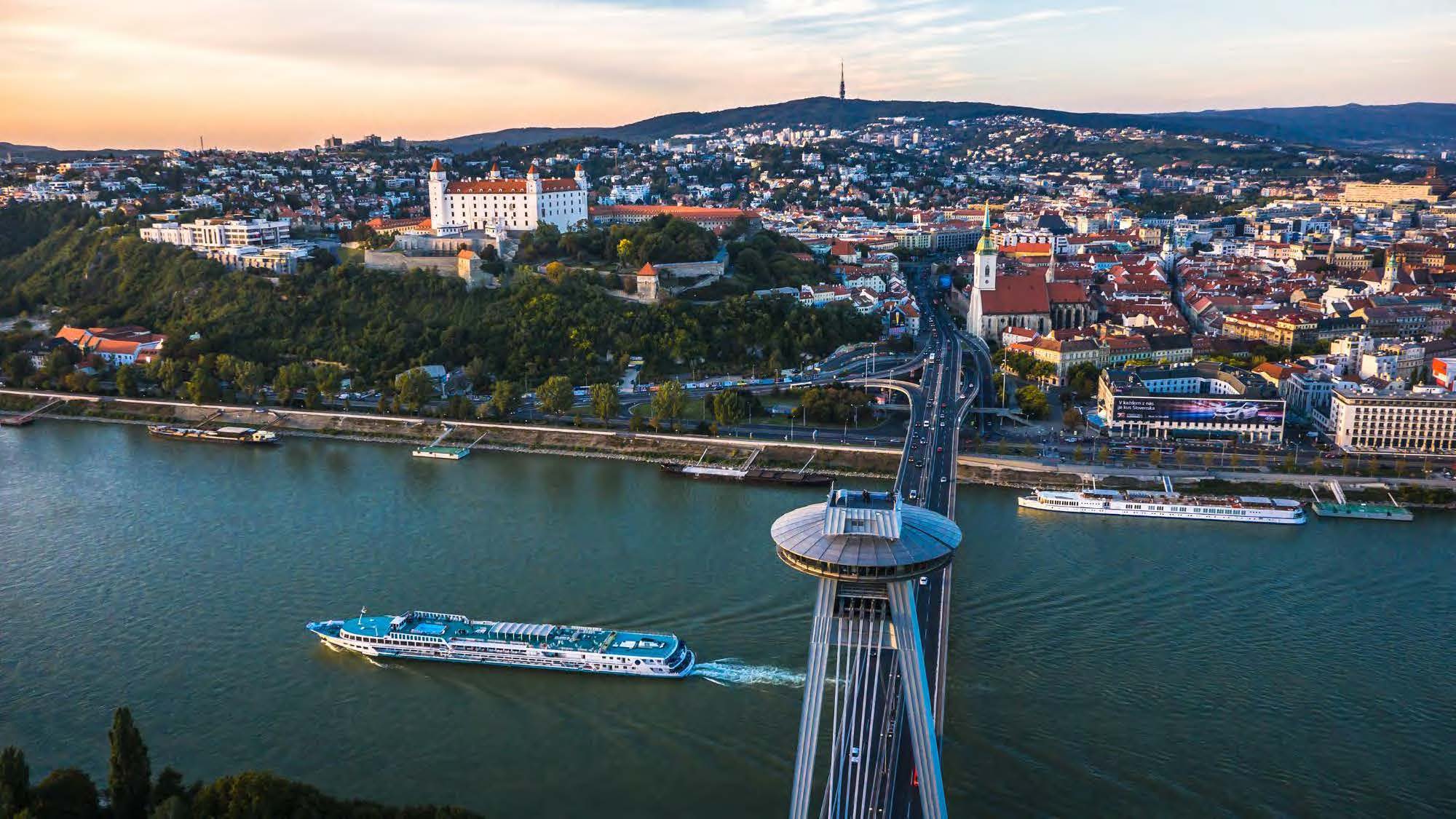 Bratislava, the capital of Slovakia 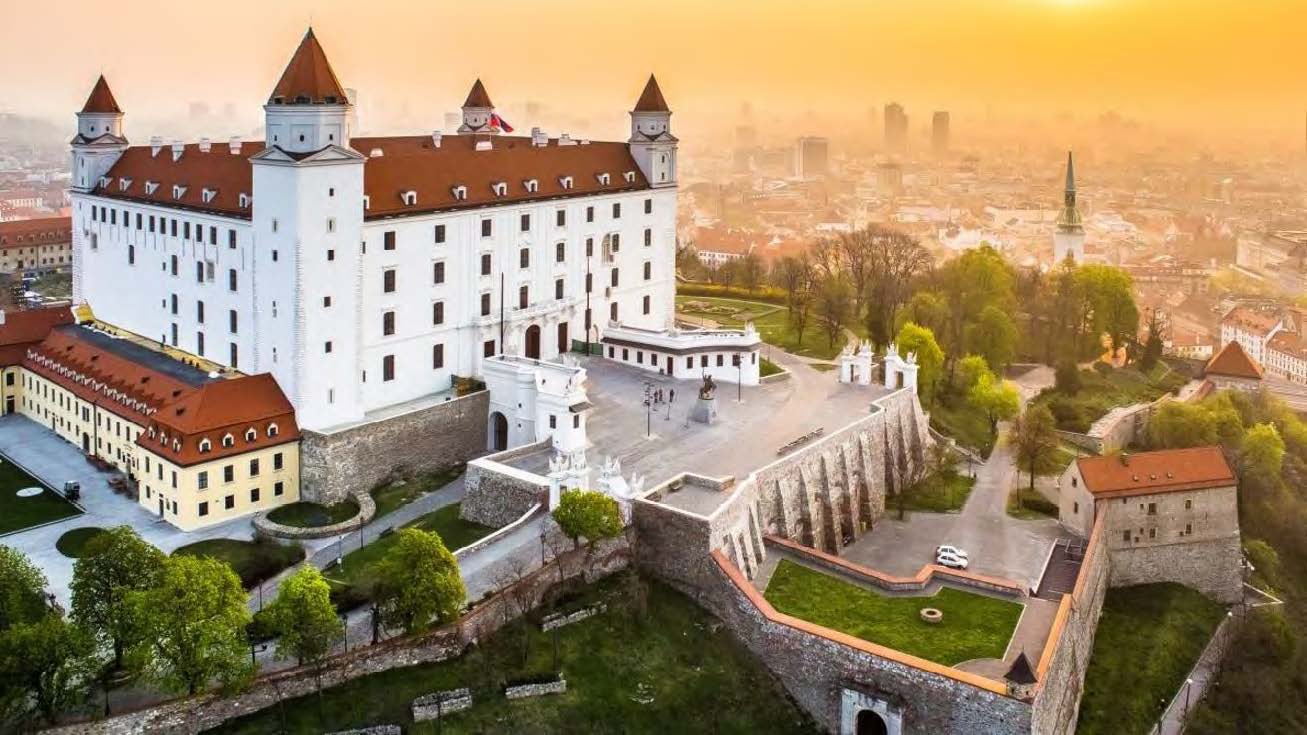 Perched on a hill above the old town sits Bratislava’s breathtaking 15th-century castle. Concerts are often held in the courtyard during summer months and within the castle is a music museum including a collection of traditional Slovak folkloric instruments.

Concerts are often held in the courtyard during summer months and within the castle is a music museum including a collection of traditional Slovak folkloric instruments.

Other city treasures include the Slovak National Theater and St. Martin’s Cathedral. The beautiful Franciscan Church, Jesuit Church, and Clarissine Church in Old Town are all possible performance venues as well as the grand Slovak Radio Building. 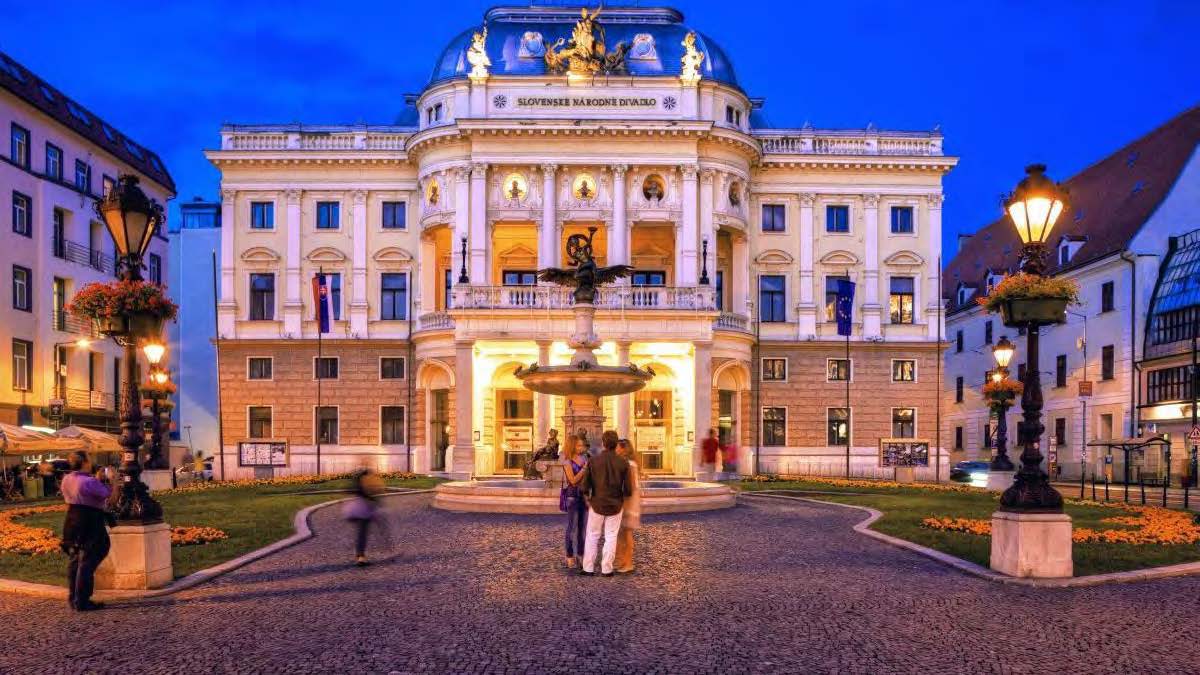 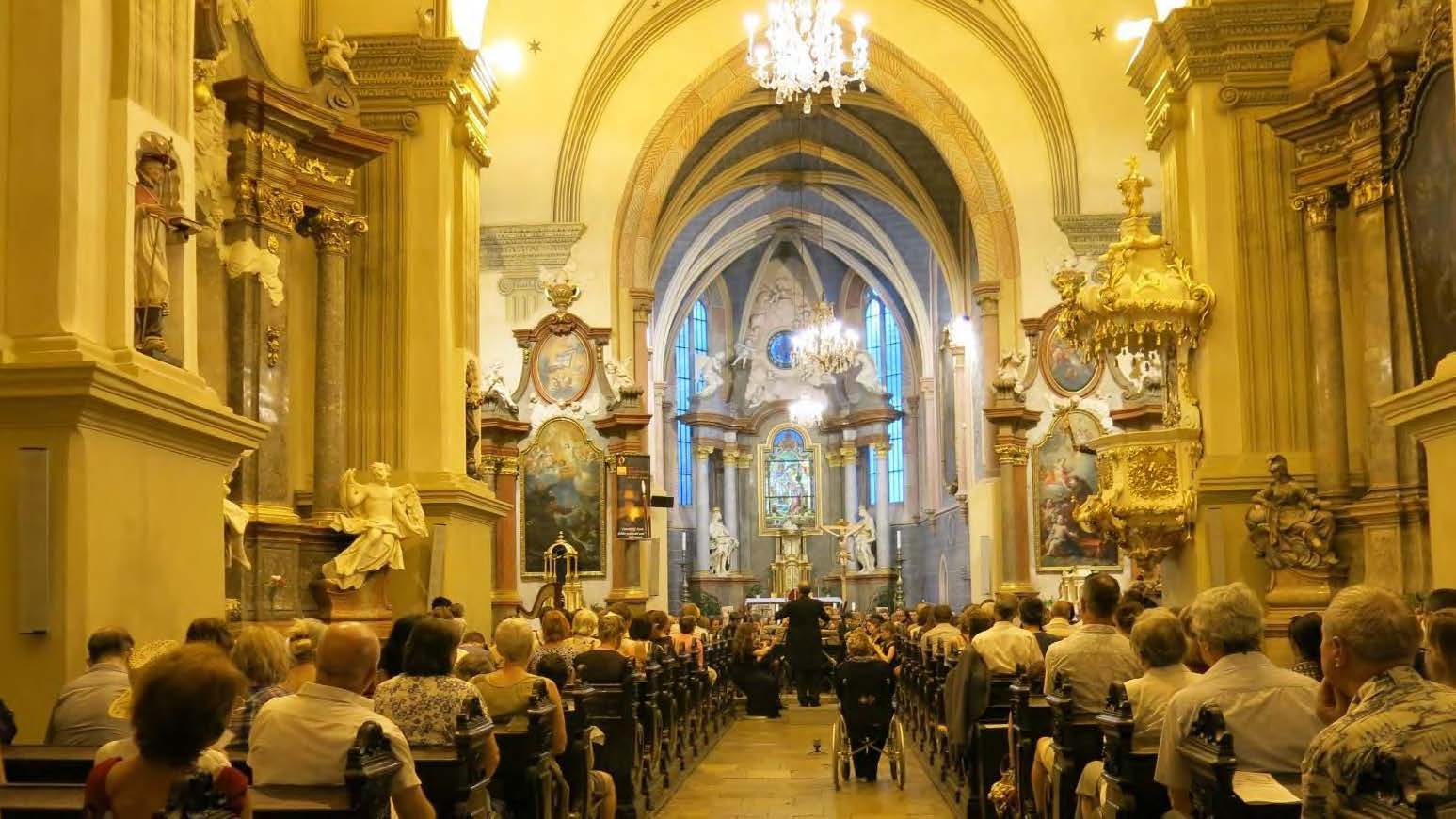 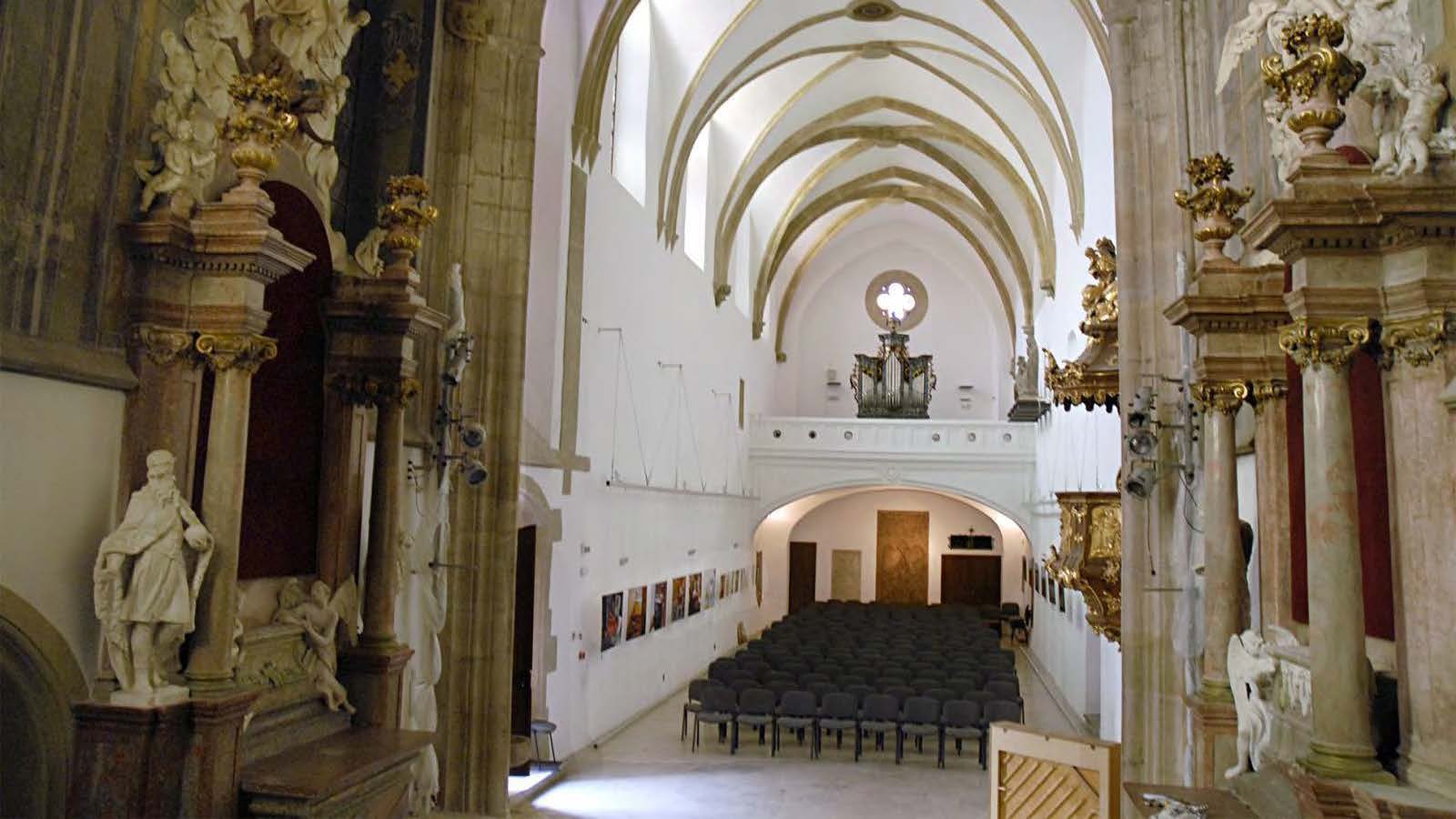 Leave Bratislava for Prague and stop in the UNESCO heritage town of Telc en route. Telc boasts one of the prettiest and most historic town squares in the Czech Republic featuring the magnificent Telc Chateau. 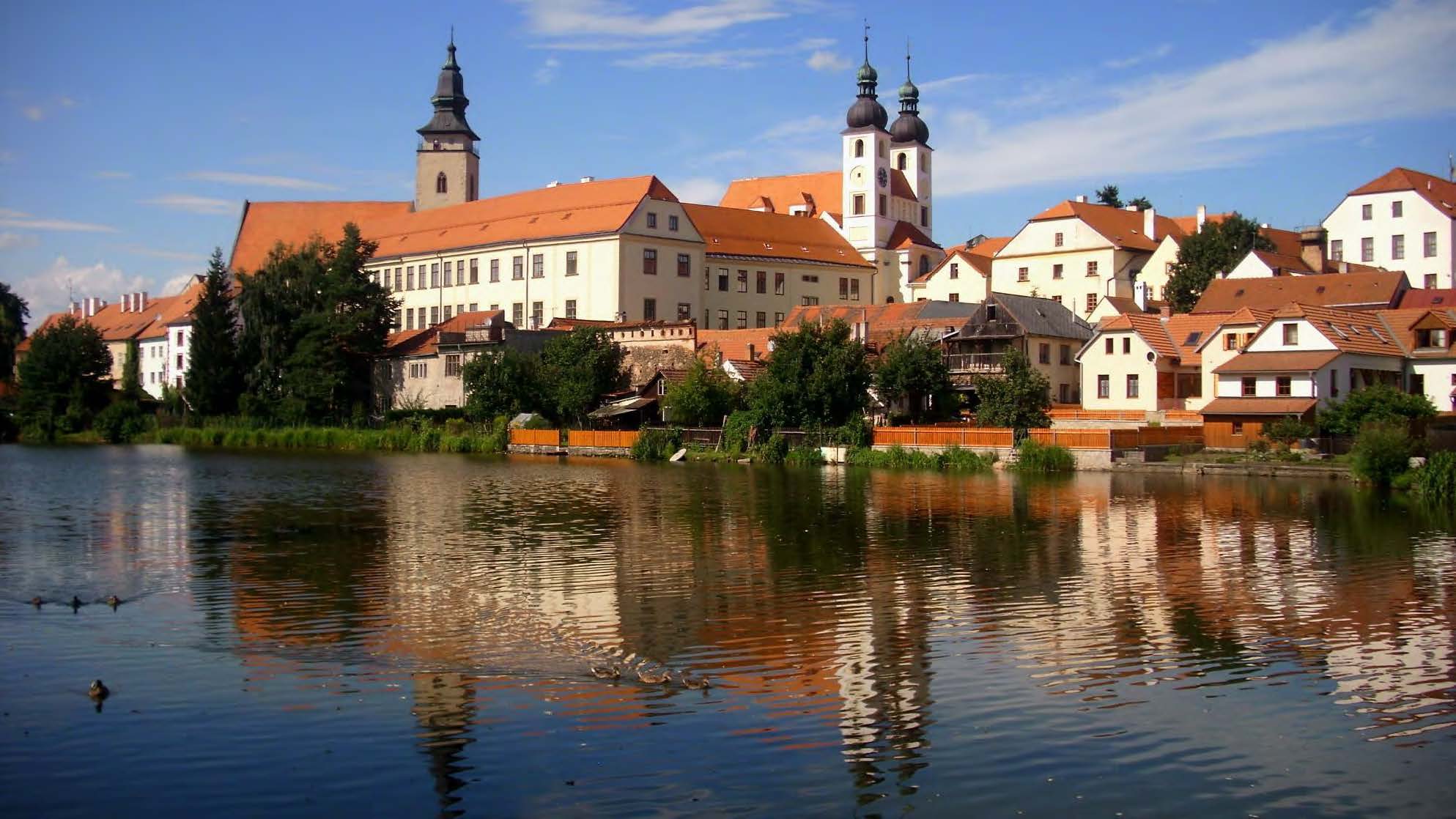 The town of Telč in the Czech Republic boasts one of the most beautiful and historic town squares in the country.

The journey then continues to the beautiful Czech capital of Prague. Here, you can visit a variety of cultural attractions such as the 14th century Charles Bridge and the immense Hradcany Castle complex with its Archbishop's Palace, narrow alleys and Golden Lane, the legendary den of medieval alchemists. 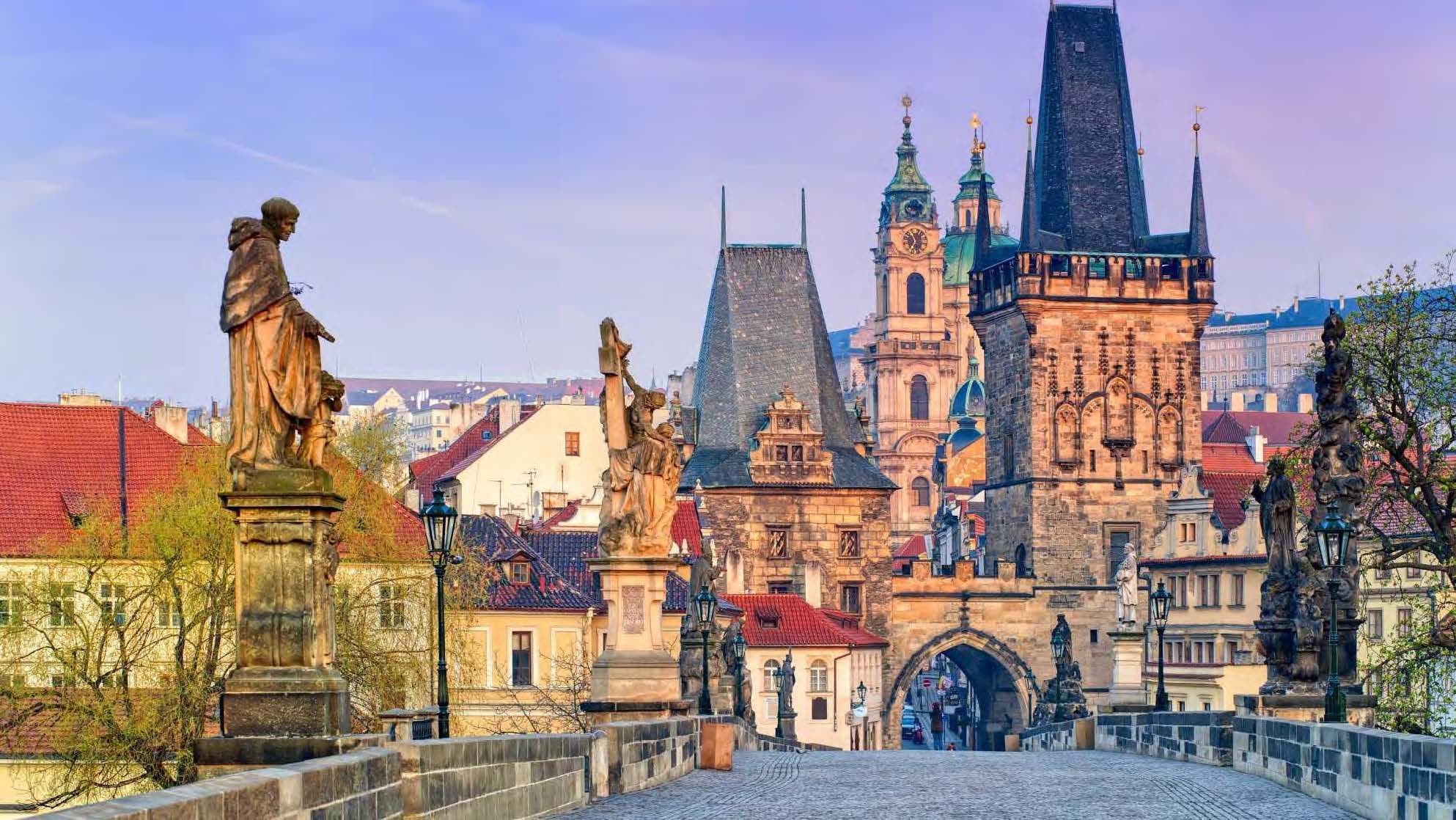 Wander through the stunning Old Town Square with its medieval Astronomical Clock and venture to the Jewish Quarter to visit the museum and Europe’s oldest surviving Jewish cemetery. 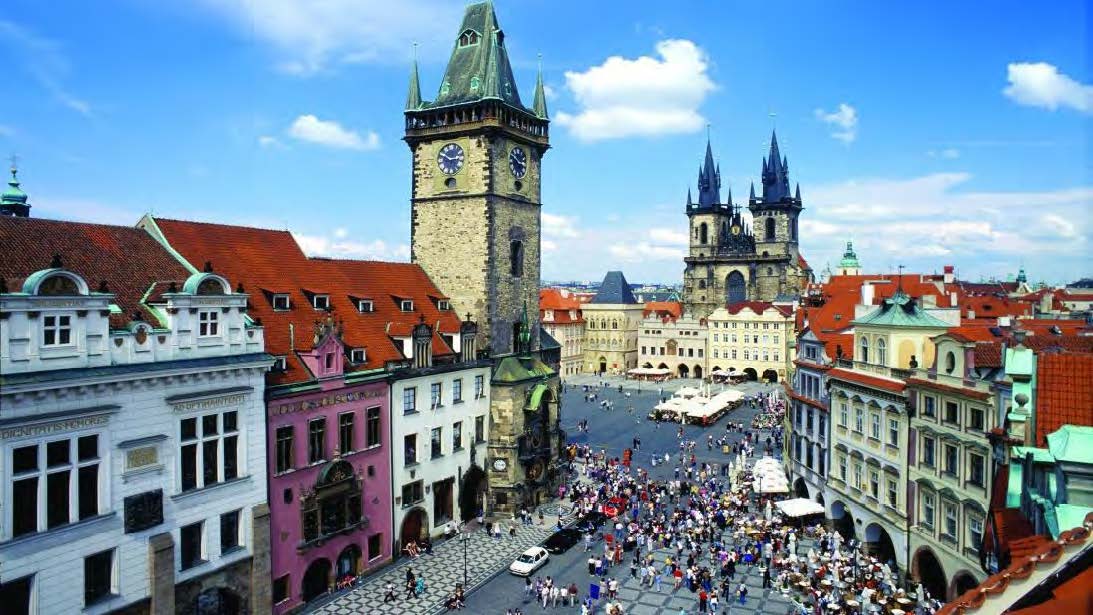 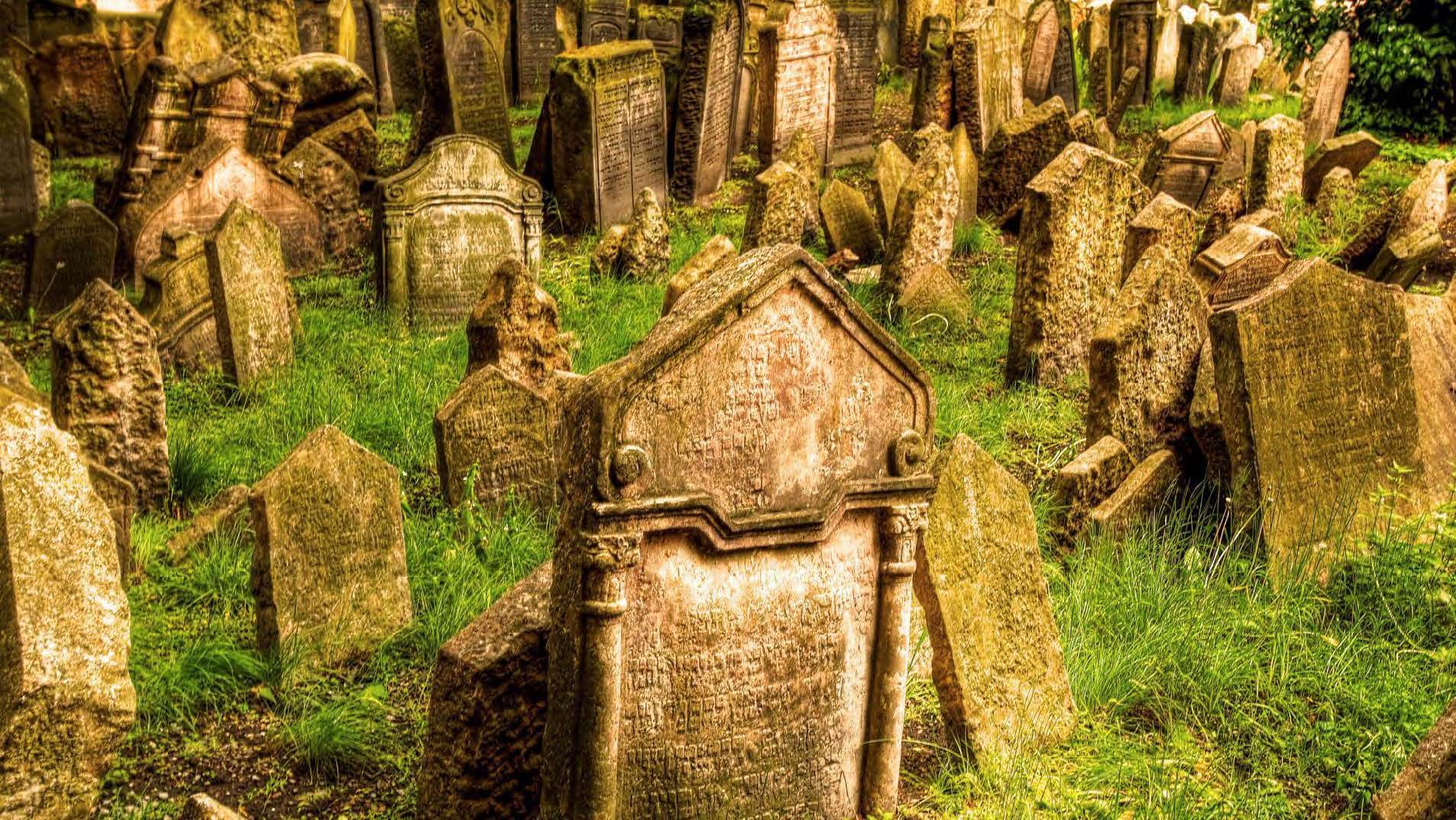 The Old Jewish Cemetery in Prague

Above everything else, Prague is and always has been a musical city. Mozart premiered his opera Don Giovanni in Prague’s Estates Theatre and his house there is now a museum. Prague is also the birthplace of famous composers Antonín Dvořák, Leoš Janáček, and Bedřich Smetana. 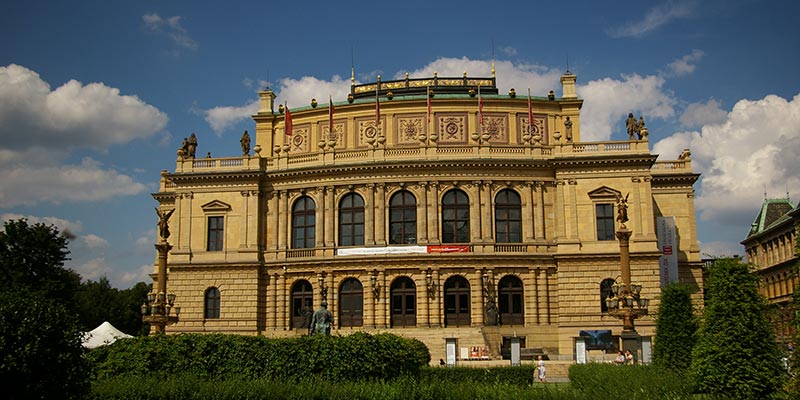 The Rudolfinum in Prague 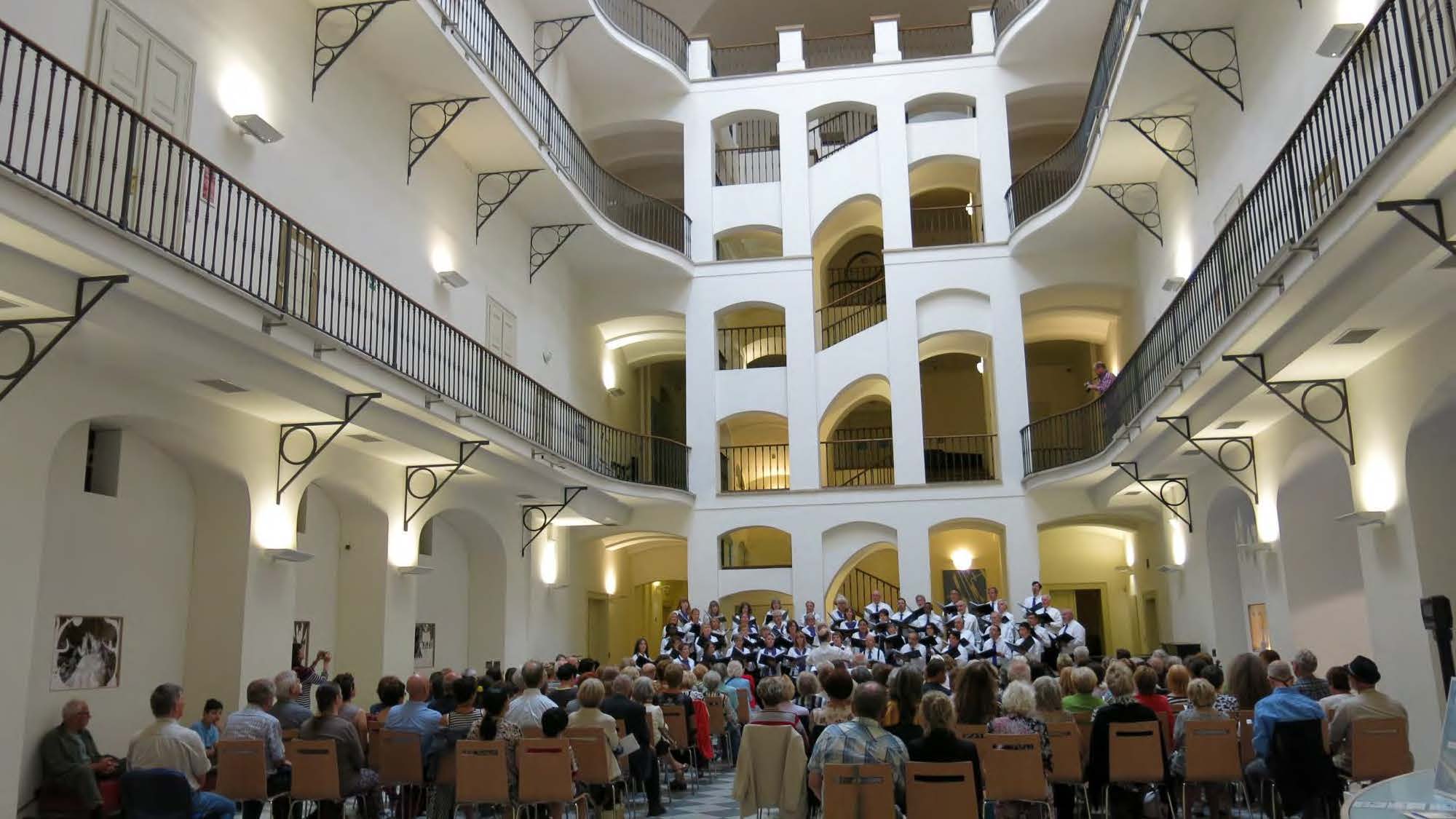 The Czech Museum of Music

Visiting ensembles may have the opportunity to perform in the prestigious Rudolfinum, home of the Czech Philharmonic, while Smetana Hall, the Czech Museum of Music or St. Nicholas Church are a few of the other wonderful venues available here.

Visiting ensembles may have the opportunity to perform in the prestigious Rudolfinum, home of the Czech Philharmonic.

Finish off a fantastic tour with a farewell dinner cruise on the River Vltava. 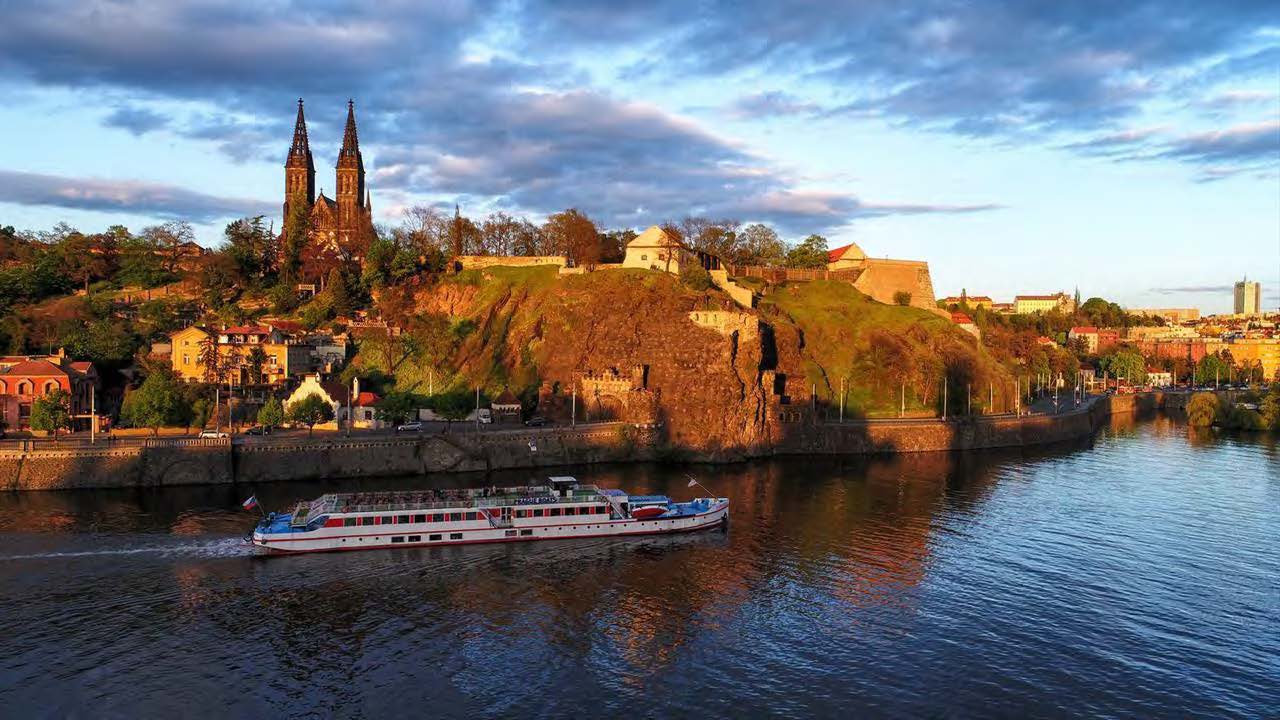 A dinner cruise ship coasting along the River Vltava

With historic cities, a wealth of cultural attractions, a rich musical heritage, and spectacular performance venues, Hungary, Slovakia, and the Czech Republic are well worth a visit!

View our sample itineraries for:
The Czech Republic | Slovakia

Tips on Recruiting for Your Band Program

Built for the Paris Opera at the behest of Emperor