Encore Tours/ACIS President Peter Jones is always humming and singing as he walks through the office and it brings a smile to the faces of everyone around him. Recently he sat down with us to tell us about his love of music for the kick off of a new blog series “Peter’s Music Picks.” Every other week, we’ll share the songs that Peter has been singing and thinking about, as well as their cultural and historical significance.

This week, Peter has been singing The White Cliffs of Dover, a WWII song made famous by singer Vera Lynn in 1942.

Peter said, “I stayed at my mum’s flat in London two days ago with my granddaughter. I bought a poppy and that made me think of Veterans Day and the war and Mum and Dad. It’s been ringing through my head. And my poppy is traveling everywhere I go.”

Veteran’s Day is an official U.S. public holiday, observed annually on November 11, that honors military veterans. It coincides with other holidays, including Armistice Day and Remembrance Day, celebrated in other countries that mark the anniversary of the end of WWI.

The White Cliffs of Dover was composed in 1941 by Walter Kent to lyrics by Nat Burton. The song was written about a year after British Commonwealth and German aircraft had been fighting over the Cliffs of Dover in the Battle of Britain. The line “there’ll be bluebirds over the white cliffs of Dover” refers to Royal Air Force fighter pilots in their blue uniforms, and expresses confidence that they would prevail. The lyrics looked hopefully toward a time when the war would be over – “There’ll be love and laughter, and peace ever after, tomorrow when the world is free.” 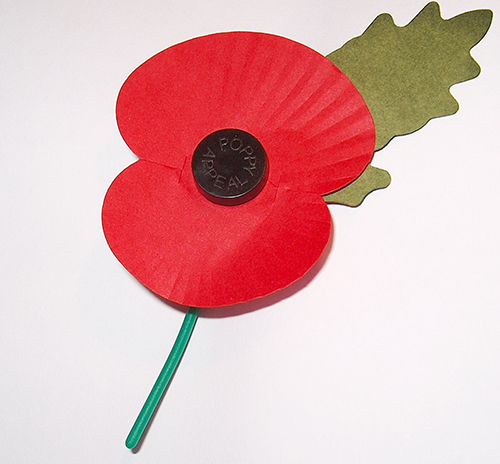 Red remembrance poppies are artificial flowers that have been used since 1921 to commemorate military personnel who have died in war. They are made to look like common field poppies and are most common in the UK, Australia, New Zealand, and Canada. Their use for commemorating service people killed in conflict was inspired by the 1915 poem “In Flanders Field” by John McCrae.

For more articles on topics in music history, subscribe to the Encore Tours blog!