In February 2019, Saint Anthony’s High School (South Huntington, NY) embarked on its 24th Concert Tour under the guidance of Encore Tours, a partnership which began in 1996. Our custom is to alternate each year between a chorus and orchestra tour. Our trips have included Italy, Spain, Portugal, France, Greece, Austria, Germany and China. In addition to concerts and touring, our excursions are also religious in nature highlighting pilgrimage sites at which we sing Masses and pause for prayer and singing. This year’s tour included Padua, Venice, Pisa, Florence, Siena, Rome, Vatican City, Assisi, and Stroncone.

Among the highlights of this year’s trip:

1) Padua – Singing Mass at the Main Altar in the Basilica of Saint Anthony of Padua, patron of our high school. Following the Mass, each student had the privilege of individually going up to the tomb and praying, after which we also had the opportunity to pray in the ornate chapel of the relics of Saint Anthony. 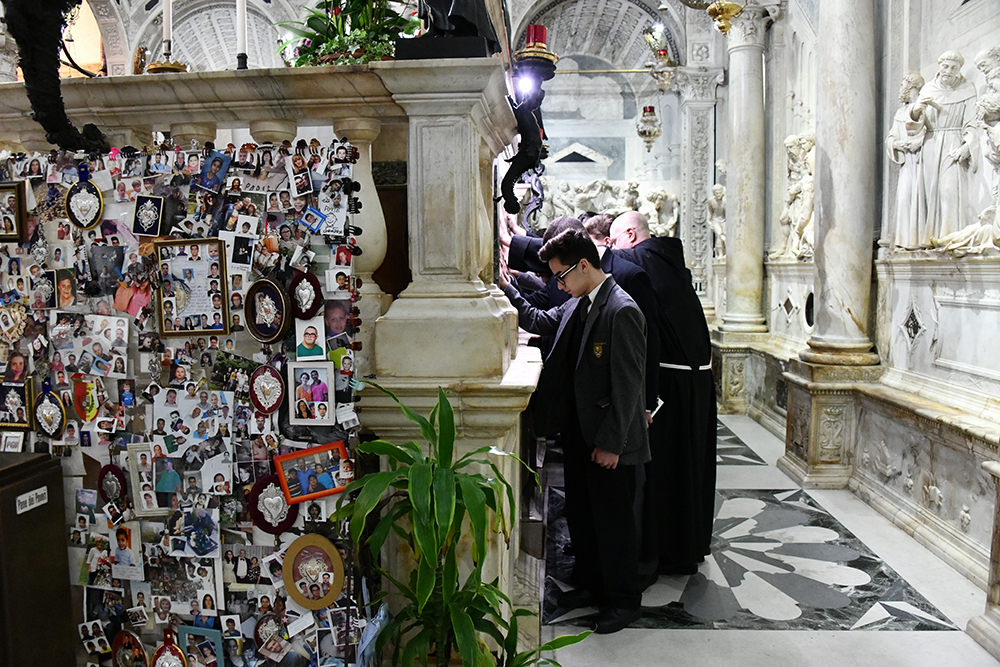 2) Venice – On Saturday morning our 120 students lined the Rialto Bridge and sang the Italian National Anthem overlooking the Grand Canal! Following the anthem, we sang a “guerrilla concert” in the piazza at the base of the bridge. 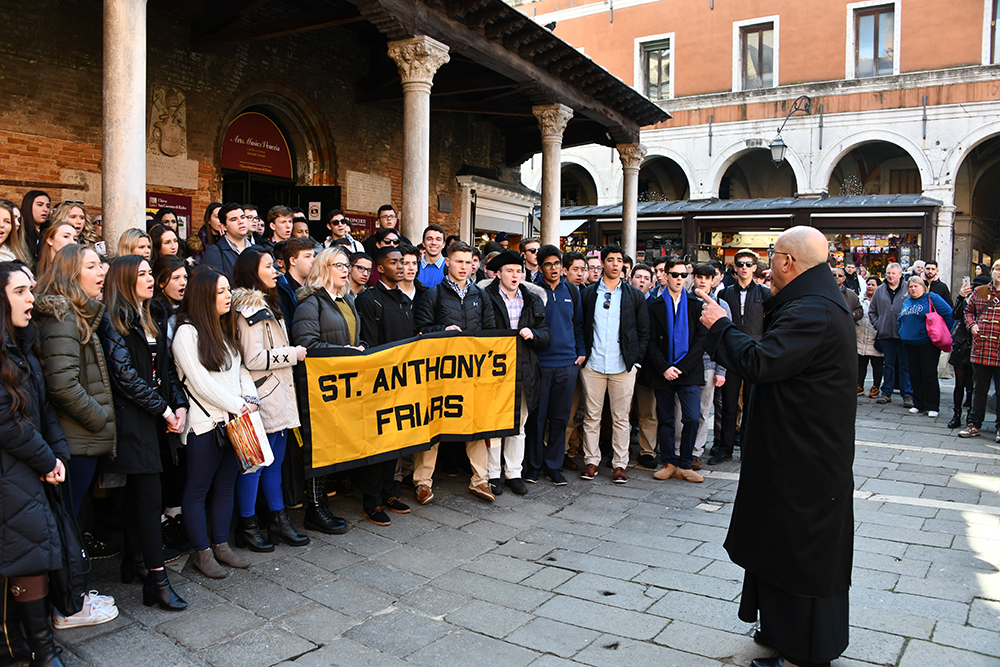 3) Vatican – On Wednesday, our students were introduced at the Papal Audience and we sang a brief hymn before the Holy Father, Pope Francis. Following the Audience, we sang a Mass at the privileged Altar of the Chair of Saint Peter in the Basilica itself. 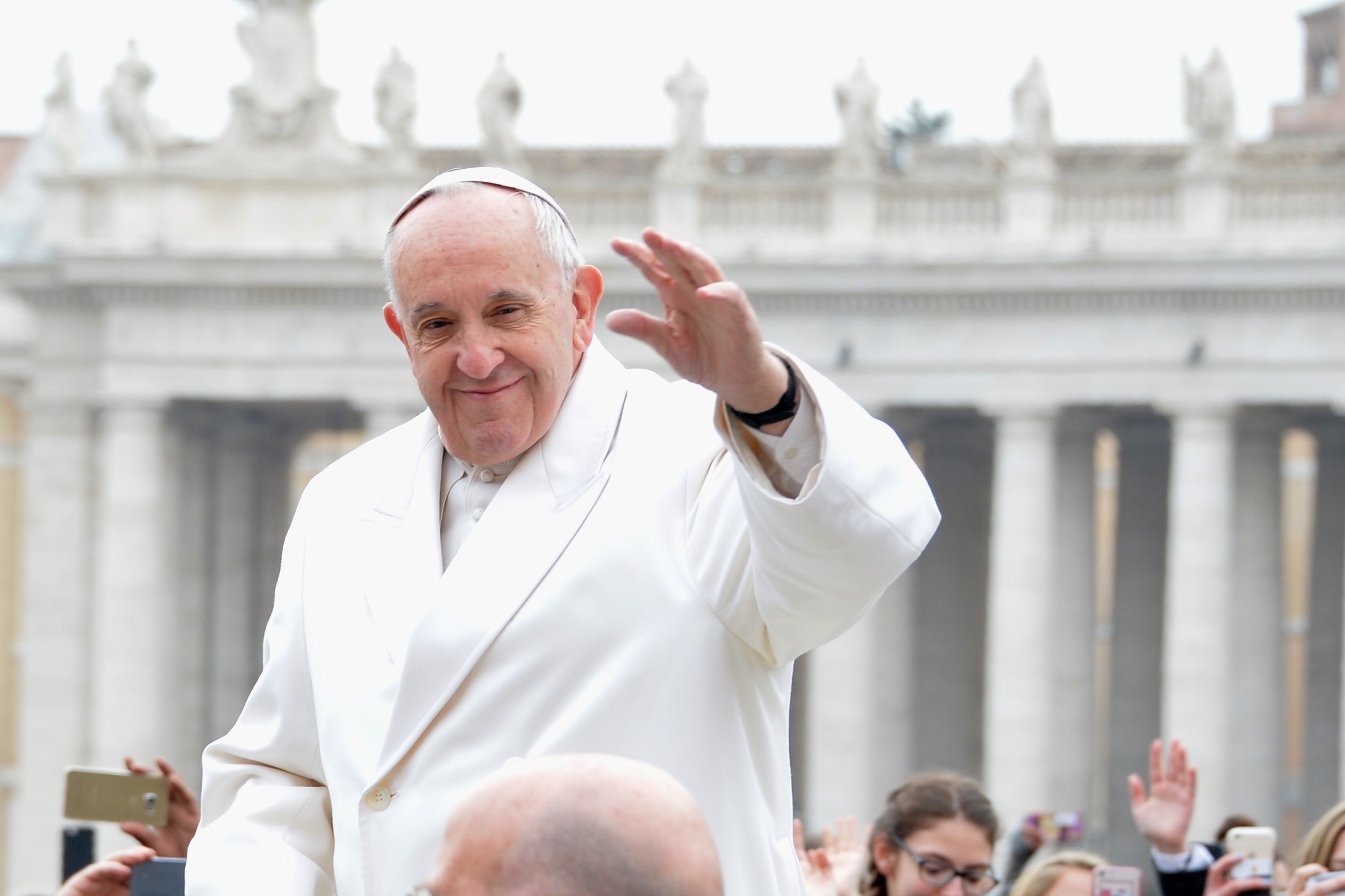 4) Rome – Singing a “standing room only” concert in the dazzling Gothic Cathedral of Santa Maria sopra Minerva, renowned for its stunning starry blue ceiling and graced with the tombs of Saint Catherine and Fra Angelico. The beauty of the church is further enhanced by the graceful hospitality of the Dominican Friars who welcome us each year to their beautiful home. 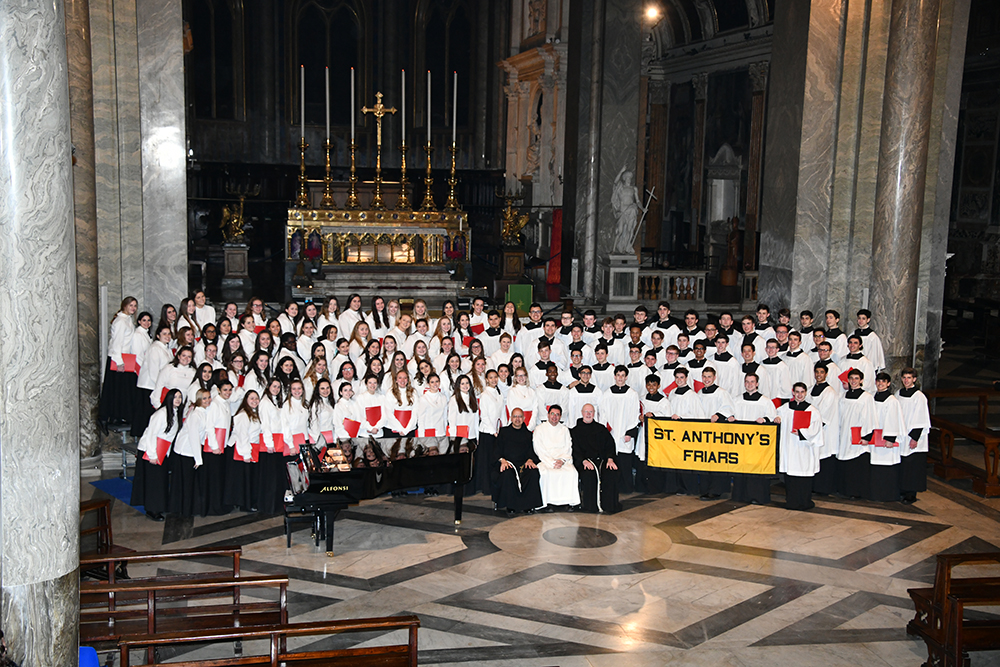 5) Assisi – Singing Mass in the Chapel of Saint Catherine in the Lower Basilica followed by a procession to the tomb of Saint Francis. The stirring acoustic of our voices resonates beneath the stunning frescoes of Giotto illustrating the life of Saint Francis and attesting to the history of Western Art through the centuries. 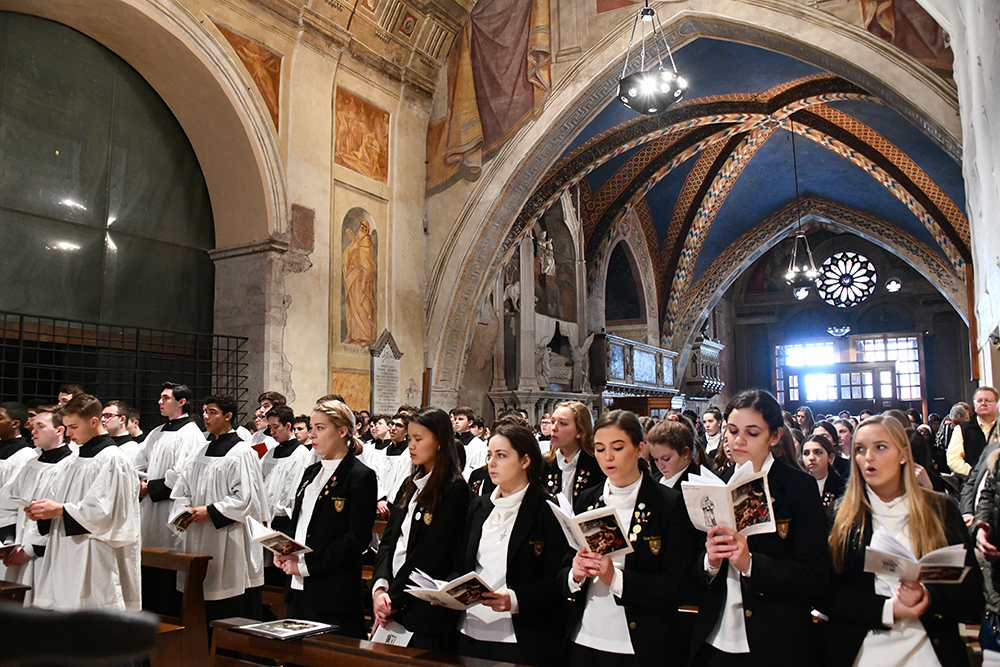 6) Chiesatonda – gelato festival and folk dance lesson with the troupe Spoletino. Following this lesson, the students were able to dance to the band music provided by townspeople of Stroncone which welcomed us to this picturesque hillside town seemingly preserved intact since the Middle Ages.

This year, based on the suggestion of our long-time Tour Manager, Mauro Tonelli, who has been with us since 2002, we learned the Italian National Anthem “Fratelli d’Italia” and used it throughout our trip. It was an immediate connection to concert audiences as well as in any square, bridge, fountain, or monument on which we launched any of our spontaneous “guerrilla” concerts. Mauro has been able to tailor all of our tours to fit our needs. As we are usually a large group with multiple buses, Mauro is able to easily solve problems which arise from coordinating such a large ensemble. This year, we had an early morning bus crisis with mixed signals regarding our departure time for the Vatican Audience. Mauro immediately solved it by ordering 40 taxis which got us to the Bernini Fountain within minutes of our original arrival time. It was a miraculous recovery! 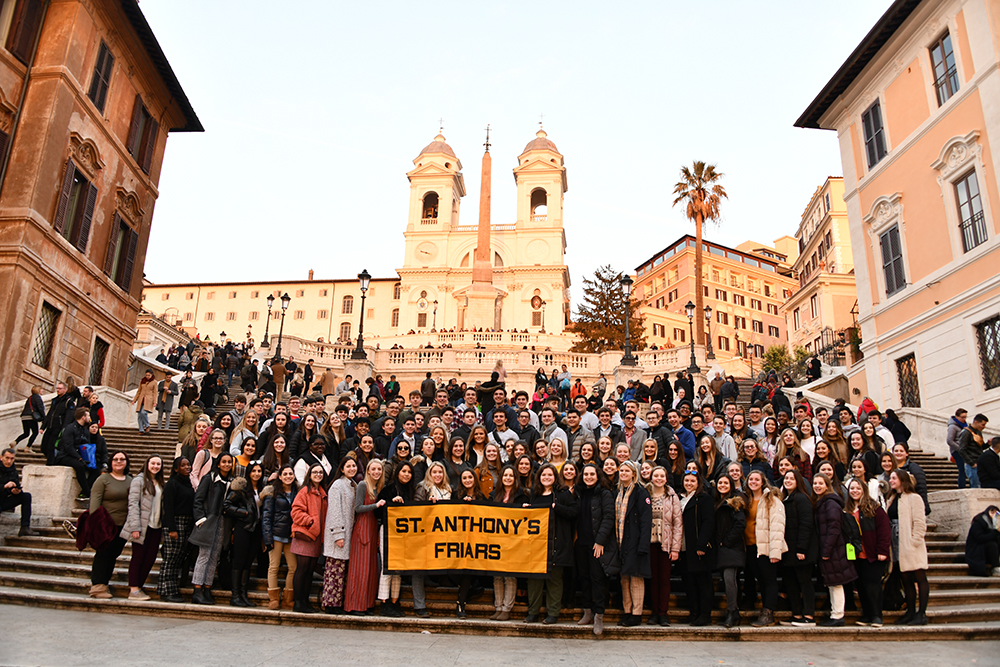 In the months prior to our tours we always schedule ten evening rehearsals into which we incorporate Italian and Latin Masses as well as a meal together. Having these “practice” meals allowed us to better prepare the students to dine together and gel as a group as well as to instruct the students on proper dress code requirements when not in concert attire or uniform.

When I first contemplated a European Tour, I was very intimidated by all the nuts and bolts that naturally factor into taking on such an undertaking. However, Encore Tours provides step-by-step procedures, protocols, deadlines, and advice at every step of the way. Every Music Director that I have ever met is usually blessed with a vast degree of concern for detail and organization. It seems to be part of our DNA. Coupled with the experience of Program Directors, Consultants, and Tour Managers at Encore, every one of our tours has been a life-changing adventure for each and every one of our students. I have been doing this for 30 years and now have sons and daughters of parents who had gone on my tours all very anxious to have their children experience the same fantastic journey. Additionally, our tours have been a major public relations and advertising boon for our music programs. Our Chorus alone boasts 600 members! My advice to every instrumental and choral director is to give it a try – it takes hard work – but you will never regret the profound impact on your students! 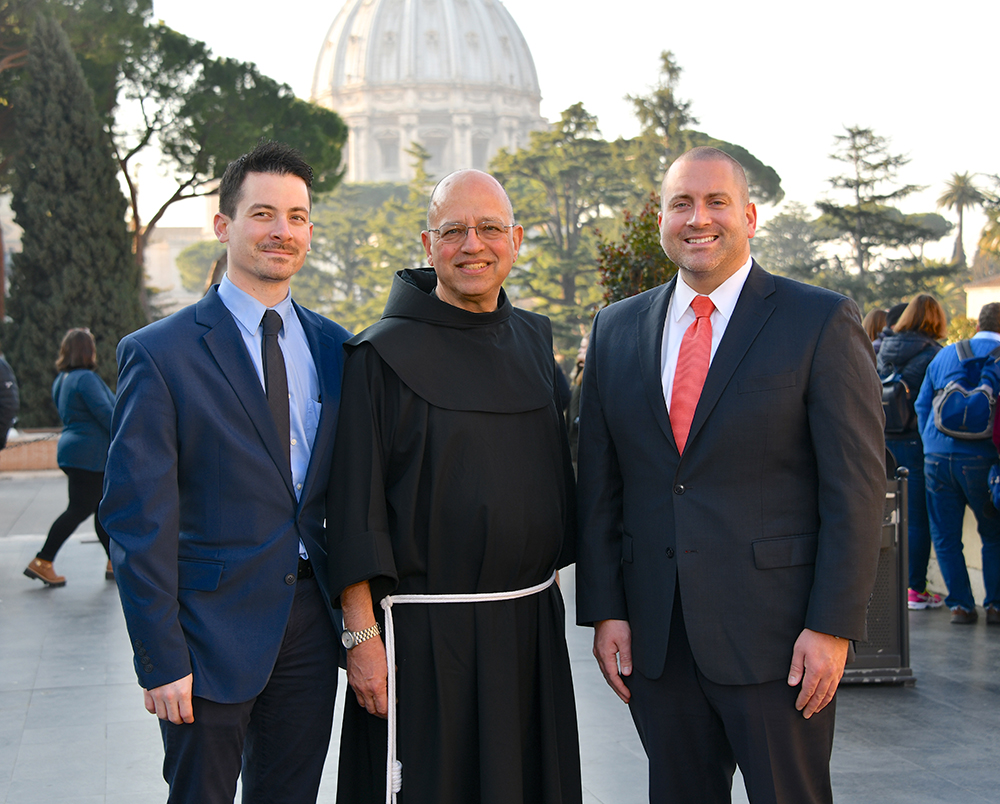