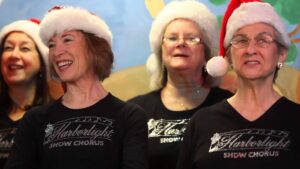 Every Wednesday night during the “school year”, I conduct a small barbershop chorus in North Shore, MA – the Harborlight Show Chorus. I have been in many choruses throughout my life, chamber choirs, community choral ensembles, collegiate choirs, and more, but throughout my many choral experiences I had never had a choir that hosted regular open rehearsals. So when I came into the barbershop world, I was surprised to find that our weekly rehearsals were often filled with people I had never seen before! At first, it was difficult to manage the influx of people, but it quickly became part of my normal routine to modify my rehearsal schedule to incorporate our visitors. More importantly, our chorus benefited from our guests in many ways:

1. Rehearsals were more engaging and interesting

Naturally, our chorus immediately went into performance mode upon spotting a visitor, trying to impress them with their proper choral technique and poise. In return, as I conducted I could feel the energy increasing and see the enjoyment on our members’ faces. Instantly the chords were more in tune, the forward motion of the phrasing was better and it was fun to watch!

2. Recruiting was a breeze (ok let’s not lie, but it was definitely much easier!)

Of course, we still had to put in the effort to promote our open rehearsals, but once people attended, it was easy to keep them. Sometimes all it takes is a welcoming crowd and a chance to sing to snag a new member. Once they are there, they can’t help but enjoy themselves and keep coming back for more.

3. And we even got promotional benefits from it

Even if the guests weren’t interested in joining the chorus, most of them were willing to help spread the word about the chorus to the community. They would attend our performances and ask to be included in our regular announcements. And of course some even referred a friend or two!

At first, I may have been a bit skeptical about open rehearsals, maybe just due to the insecurity of being able to run a rehearsal while also taking the time to deal with new prospects. But now, I am 100% a strong advocate for open rehearsals for choral ensembles and I highly recommend that you try it a few times. You won’t regret it!

The post Choral Ensembles & The Importance of Open Rehearsals appeared first on Backstage at Encore Tours.

In Encore Live: From London, we discussed the city

Happy #WorldTeachersDay! We want to express our g

Revered to this day as the most talented cellist i

Following the tremendous loss of life in WW1, Germ

You still have two hours to sign up for today's En

Did you miss yesterday's Encore Live event? Not to