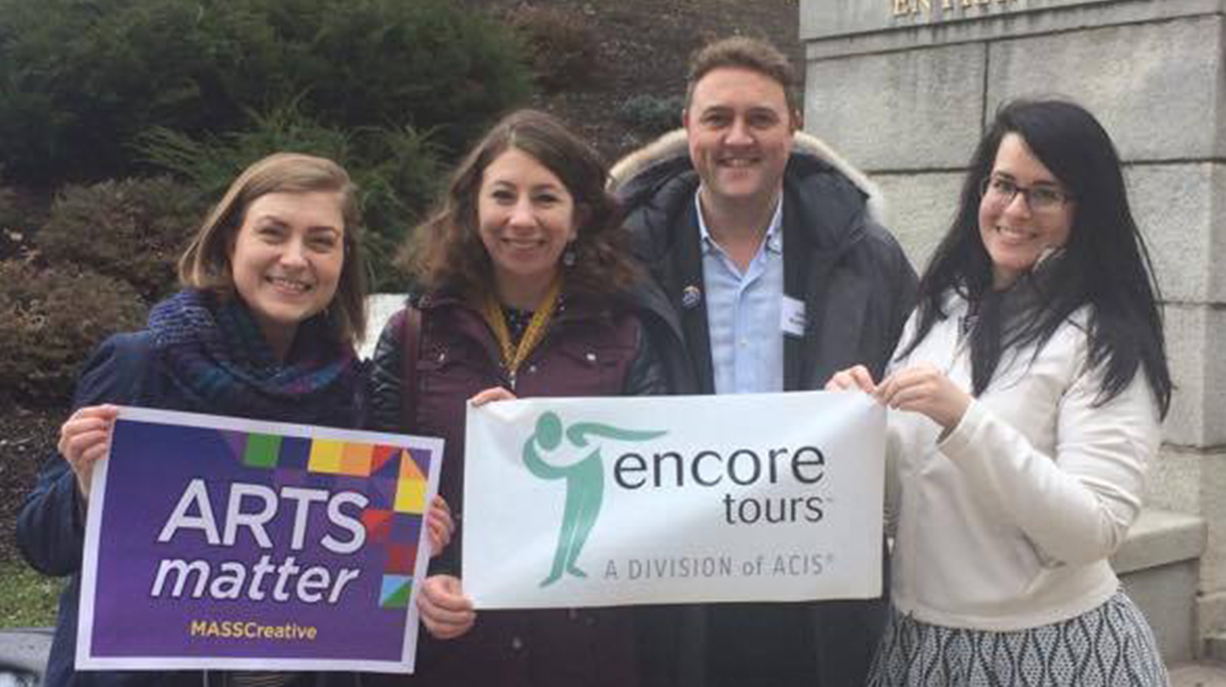 On Tuesday, March 28th, the Encore Tours team joined over 600 fellow arts advocates from across Massachusetts at the Paramount Center in Boston for Arts Matter Advocacy Day (AMAD). The event began with performances by the Berklee College of Music Combo and the Conservatory Lab Charter School Winds and Brass Ensemble, as well as speeches on the importance of the arts by Representative Mary Keefe (D-Worcester), Lee Pelton, President of Emerson College, and Myran Parker-Brass, Executive Director for the Arts at Boston Public Schools, just to name a few. The standing-room only crowd got a taste for what would be coming later in the afternoon with a role play activity about how a conversation with a legislator might go.

Following a march to the State House, featuring music by BABAM! and a slew of “Arts Matter!” signs, arts advocates put their skills to the test by meeting with representatives to make specific asks about supporting the arts in Massachusetts. These included cosponsoring a bill to establish a Massachusetts Public Art Program and supporting legislation that would update the arts education curriculum as part of the Every Student Succeeds Act.

AMAD was put on by MASSCreative, a Boston-area organization that works to build a more vibrant, health and equitable Massachusetts by supporting the arts and cultural communities. They provide resources, training and tools to empower arts advocates to be effective and successful. The response to AMAD has been overwhelmingly positive – arts advocates felt inspired and empowered and legislators were impressed by the passion and preparedness of those who spoke with them. You can get a recap of the day via pictures, posts and comments from attendees on MASSCreative’s Storify. 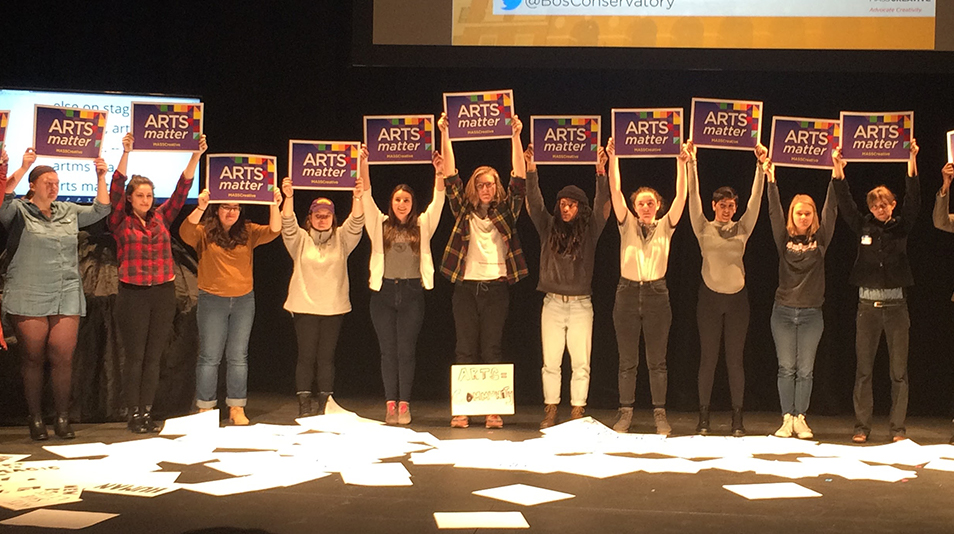 Here’s what members of the Encore team took away from AMAD17!

“I especially enjoyed the performance by the Conservatory Lab Charter School band from Boston. These were young kids who were obviously excited about music. And the trombone player was definitely laying it down! I think it’s important for music educators to continually advocate for their students and programs. Get your ensembles out in the community as often as possible so they can be seen, heard and appreciated.”

“[AMAD] was my first experience lobbying elected officials for something that I believe to be important. I learned that it is something accessible, meaningful, collaborative, enjoyable and well worth doing more of in the future!”

“Attending AMAD17 was a truly valuable experience. The speeches pre-march were very influential in my overall experience. It was amazing to see how the arts have affected so many people in different ways. They provide a vessel for self-confidence, team building, and empathy. All crucial things that help build a greater society.”

“It was very encouraging to see the massive amount of people who had taken time out of their day to come support the Arts. I’d never actually lobbied a congressman before, so it was interesting to see the process, meet representatives and understand how to be more active in local legislation that is so close to my heart. One of the highlights was definitely the Conservatory Lab Charter School Winds and Brass Ensemble’s performance!  They were all incredibly talented, though I feel the drummer may have stolen the show.”

“AMAD was an invigorating day of learning, making connections and actively advocating for the arts! My first bit of advice for music educators and arts supporters who want to get involved in arts advocacy is to not be afraid! People are friendly and receptive – it’s your legislator’s job to listen to you and represent your views in Congress. My second piece of advice is to take advantage of the plethora of resources that exist to help learn about pieces of legislation related to arts advocacy, how to talk to legislators, and more! The research has already been done for you, you just have to arm yourself with it.”

For those in Massachusetts, MASSCreative is a great organization to join and check out for more information on arts advocacy. For those in other states, check out our past blog post on the importance of arts advocacy and resources for music educators.

Encore Tours is proud to advocate for the arts and on behalf of music educators everywhere. #ArtsMatter #MusicMoves #EncoreTours